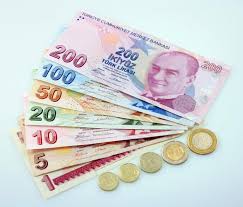 The Turkish Lira is the currency in the country of Turkey. In December 2003, the Grand National Assembly of Turkey passed a law that allowed for redenomination by the removal of six zeros from the Turkish lira, and the creation of a new currency. It was introduced on January 1 2005, replacing the previous Turkish lira. The current exchange rate of the Turkish lira is right around 3 Turkish lira to 1 US dollar. The new banknotes have different sizes to prevent forgery and each denomination depicts a famous Turkish personality. They also have coins which are called kuruş and come in denominations of 1, 5, 10, 25, 50 and 1 Turkish Lira.

The history of the Turkish lira is just as colorful as its national history. The term ‘lira’ was first used in 1844 by the Ottoman Empire. At first, lira was used to refer to a gold coin. Other monetary units used by the Ottoman Empire were akce (currently known as kurus) and para.

Paper money was later on introduced and kurus was used instead of lira. It was only in the mid 1870s when lira replaced kurus. The denominations of the old Ottoman lira start from 5 to 1000. In the early 1920s, the Ottoman lira was replaced by the Turkish lira, which includes silver coins and bank notes. The denominations of the Turkish lira notes are 1, 5, 10, 50, 100, 500, and 1000 lira. They symbol of the Turkish Lira is ₺ and the code for it is TRY and the abbreviation is TL.

Money is important in any culture, but the sad thing about the Turkish Lira is that it will not make a difference eternally. It will all pass away, and cannot be taken with you when you go. But we want to go to Turkey ,and take the truth of the gospel so we can lay up treasures in heaven and teach them to lay up treasures in heaven. Will you pray for us that we can raise our support quickly and get to the Republic of Turkey quickly!