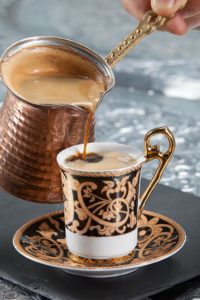 From the days of the Ottoman Empire through the present, coffee has played an important role in Turkish lifestyle and culture. The serving and consumption of coffee has had a profound effect on betrothal and gender customs, political and social interaction, prayer, and hospitality customs throughout the centuries. Although many of the rituals are not prevalent in today’s society, coffee has remained an integral part of Turkish culture. From the Ottoman empire until now coffee has had a profound effect on social interactions. Men and women would meet at coffee houses to discuss life and politics and play backgammon. Over the years, Turkish coffee houses have become social institutions providing a place to meet and talk. Today, Turkish coffee houses continue their role in society as a meeting place for both the cultured citizen and the inquisitive traveler.

Turkish coffee is not prepared in the normal way coffee usually prepared. It is ground very fine and then placed in a special coffee pot called a cezve. It is not actually boiled but heated up and the coffee will begin to dissolve. Sugar is also added before the coffee has been brewed .There are six levels of sweetness to Turkish coffee ranging from very sweet to black. As the coffee begins to heat up, it will begin to foam.  A rule of the Turkish coffee ceremony dictates that if the foam is absent from the face of the coffee, the host loses face. It is served in small cups as it is usually very strong.

Turkish coffee has been vital in the social arena of Turkey for centuries. As the Turks would say,  “To drink one cup of coffee together guarantees forty years of friendship.” Just as coffee is important in Turkey, we want to take the truth of the Gospel to Turkey and make it even more important. Will you pray for us as we raise our support that we can get to Turkey quickly and drink lots of Turkish coffee and make many Turkish friends who will in turn come to know Christ as their Savior.